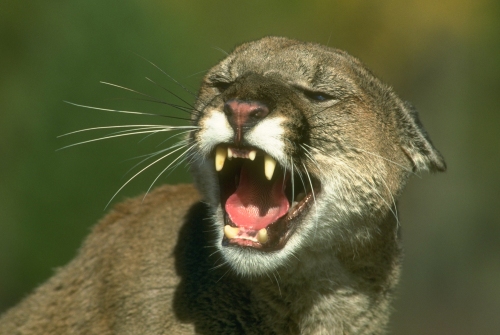 Alberta 03/04/12 edmontonjournal.com: by Justin Brisbane – Fish and Wildlife officers are on the lookout for a large adult cougar that attacked a small dog near downtown Canmore late Friday night. The brazen attack is the first known incident in the heart of the community and wildlife officials are advising the public to travel in groups and carry bear spray.

Shortly before midnight, a man was walking his two dogs on-leash near a Safeway store when a cougar emerged from the darkness and attacked the smaller of the two dogs. The man, whose identity has not been released, fought off the cougar, saving the 15-kilogram dog’s life. “The guy had a bigger dog and a smaller dog, and the cougar went after the smaller dog. He fought the cougar off and the dog escaped with a few scratches,” said District Fish and Wildlife officer Ron Wiebe. The cougar was last seen running west by Railway Avenue.

Fish and Wildlife officers spent much of Saturday hunting the cougar, calling in tracking dogs to help with the search. However, they found no tracks or kill sites to indicate the cougar was in the area. “We searched most of the town, but didn’t find many people who had seen the cat,” said Wiebe. Officers will attempt to capture the cougar, but Wiebe said it’s too early to tell if the cat will be killed or relocated. “We’ll capture and try to remove it from the area. We’ll determine if it’s a cat with a history.”

Five weeks ago, a cougar killed a dog in nearby Morley, but it was never found. Two weeks ago, a cougar was spotted allegedly hunting rabbits on the edge of Canmore near Elk Run Boulevard, but it too disappeared. It’s unknown at this time if it was the same cougar. Kim Titchener, program director with Bow Valley Wildsmart, said the incident is a great concern for the town and she suspects the cougar is desperate. “It’s not normal to have cougars this close into town. Last year, we had a couple incidents where a cougar attacked a dog and another attacked a child near Barrier Lake.” She advises the public to be aware of their surroundings and take the proper precautions. “Keep children close by, carry bear spray, which has been used on cougars, and keep dogs on a short leash. When cougars see erratic movement, they see prey,” Titchener said. She said there have been multiple incidents over the years of cougar attacks on dogs, and notes “The community monitoring report shows there is an increase in cougar conflict in Canmore. They’re more comfortable killing in the townsite. That puts us in direct conflict.”

North America & Korea 03/03/12 newstimes.com: by Vinti Singh – Local scientists have found a way to control the ticks responsible for passing Lyme disease on to humans. A new natural pesticide, derived from a strain of fungus that is deadly to the black-legged tick could help keep tick populations under control. Unlike synthetic pesticides that can be dangerous for more than just ticks, the fungus does not harm honeybees, earthworms, and other beneficial insects. The product was developed by a Fairfield-based company that was bought out by the Danish industrial biotechnology company Novozymes. The Connecticut Agricultural Experiment Station‘s field trials of the fungus helped obtain federal Environmental Protection Agency registration. Novozymes has built a plant in Canada to mass produce the product, Tick-Ex.It will be commercially available in 2014, said Kirby Stafford, the station’s vice director and chief entomologist. “A lot of people do have their yards sprayed with pesticides, and they are quite effective, because synthetic materials will give you an 85 to 100 percent success rate,” Stafford said. “But there are a special number of people who don’t want to use them. The (organic

product) may be slightly less effective, but it’s giving people options. It certainly would fit in to organic land care.” The pesticide is made of the F52 strain of the Metarhizium anisopliae fungus, which occurs naturally in soil. The station tested it on residential properties in northwestern Connecticut and found up to 74 percent fewer ticks after treatment. – For complete article see http://www.newstimes.com/local/article/Fungus-kills-Lyme-disease-carrying-ticks-3379407.php

Florida 03/04/12 Hernando, Citrus Country: Animal Control Services officers are asking for the public’s help in finding a dog that bit a woman in Hernando. According to officials, a dog approached the female victim and bit her as she walked her dog on East Princeton Lane in Hernando. The dog is described as a tan and white pit bull or boxer. Officials said if the dog is not located, the victim may have to undergo a series of rabies shots. If anyone has any information or know the whereabouts of this dog, please contact Citrus County Animal Services at 352-746-8400 immediately.

North Carolina 03/04/12 Hillsborough, Orange County: A resident in the vicinity of Baldwin and St. Mary’s roads found a dead skunk that tested positive for rabies. The carcass was discovered inside a dog’s pen. See http://www.chapelhillnews.com/2012/03/04/70367/rabies-case-confirmed.html