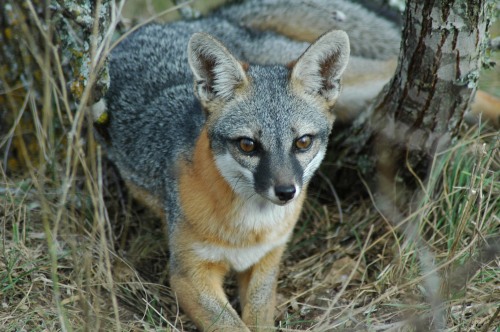 Florida 05/24/13 Alachua County: Health officials are searching for a man who assisted in caring for an injured fox at approximately 8 a.m. on Tuesday, May 21, 2013, at the entrance of the Buckingham East Subdivision (at the intersection of NW 84th Street and West Newberry Road, Gainesville). The man is described as a white male, approximately 6 feet tall, 195 pounds, and about 50 years old.  At the time of the incident, he was riding a mountain bike, and may have been wearing a tank top, shorts, fanny pack, baseball cap and had on headphones. “This individual assisted a female citizen in wrapping an injured fox in a towel for the purposes of transporting the fox to veterinary care.” stated Paul Myers, Administrator of the ACHD.  “The fox has tested positive for rabies and it is critical that this man be assessed for rabies exposure.” Anyone having information on the identity of this man is asked to call the Health Department at 352-260-7329.  Additionally, if other individuals in this area have come into contact with a fox or other wildlife, please contact the Health Department at 352-260-7329.

Arizona 05/22/13 Graham County: Health officials have confirmed that a 39-year-old county man has died of complications from hantavirus. This is the first reported case of the virus statewide in 2013. Hantavirus is carried in the urine and droppings of rodents, especially the deer mouse, and can be inhaled when areas where rodents have been living are disturbed. Arizona has reported 34 cases of the virus since 2001 and of those 38% were fatal. – See original article at http://www.myfoxphoenix.com/story/22401439/2013/05/22/graham-county-man-dies-from-hantavirus

Georgia 05/22/13 Brooks County: State health officials have confirmed that a horse stabled in the county has been diagnosed with the first case of EEE in southern Georgia this year. – See http://www.wctv.tv/news/headlines/Horse-Tests-Positive-for-EEE-in-Brooks-County–208490881.html?ref=881#.UZ1mvJymVFs

Tennessee 05/24/13 Davidson County: Mosquitoes collected in Bellevue near the intersection of Old Harding Pike and Harpeth Parkway have tested positive for WNV. No human cases have been reported. – See http://www.newschannel5.com/story/22419130/mosquitoes-test-positive-for-west-nile-in-bellevue

Texas 05/24/13 dshs.state.tx: News Release – West Nile illness was confirmed in an adult male from Anderson County. The patient is recovering from the neuroinvasive form of the disease. Additional details about the patient are not being released to protect the patient’s identity. This is the state’s first confirmed human case of WNV reported this year. Last year, Texas reported 1,868 human cases of West Nile illness, including 89 deaths.

Alabama 05/21/13 Jefferson, St. Clair, & Shelby counties: A feral cat found in the vicinity of Beech Street in Leeds on May 9th has tested positive for rabies. The cat was reported to be acting strangely. – See http://www.thestclairtimes.com/view/full_story/22660918/article-Local-vets-warning-area-about-rabies?instance=home_right_bot

suspend usage of night-drop kennels for residents giving up their pets. – See http://www.orlandosentinel.com/news/local/lake/os-lk-rabies-alert-night-drop-kennels-20130521,0,1785514.story

Florida 05/21/13 Martin County: A raccoon that bit a man on May 16th in the vicinity of the 18000 block of Southeast Federal Highway in Jupiter has tested positive for rabies. – See http://www.tcpalm.com/news/2013/may/21/man-bitten-rabid-raccoon-martin-county/

Georgia 05/22/13 Houston County: A stray dog that bit a person in the face in the Shamrock Circle neighborhood off Dunbar Road in a northern section of the county has tested positive for rabies. The dog is described as a brown-and-white female pit bull mix. The incident occurred on May 16 and the dog has been euthanized. Anyone who might have been exposed to this animal should seek immediate medical advice. – See http://www.macon.com/2013/05/22/2488855/stray-dog-tests-positive-for-rabies.html

New Hampshire 05/22/13 Hillsborough County: A feral cat that attacked three people in the vicinity of Church Street and Brown Avenue in the city of Hillsborough has tested positive for rabies. The cat was described as black-and-white with medium hair. Anyone exposed to a stray cat of this description is urged to seek immediate medical advice. – See http://www.boston.com/news/local/new-hampshire/2013/05/22/cat-tests-positive-for-rabies-hillsborough/3vWLXPhfycy02dE90YDadJ/story.html

North Carolina 05/21/13 Guilford County: A fox that was in contact with a person on Olmstead Drive off Springwood Church Road near Springwood Park in Burlington has tested positive for rabies. – See http://www.thetimesnews.com/news/top-news/rabid-fox-found-near-alamance-guilford-line-1.146888

North Carolina 05/21/13 Wake and Chatham counties: Cary town officials have warned residents to be on the lookout for a fox that came in contact with a person last week near Northwest Maynard Road and Carousel Lane. It is feared the fox has rabies. – See http://www.wral.com/cary-warns-of-potentially-rabid-fox/12469974/

Washington 05/23/13 Grant County: The children of a Moses Lake family are receiving treatment for potential exposure to rabies after they were found playing with several dead bats, which were too damaged to be tested for the virus. – See http://www.khq.com/story/22409023/moses-lake-children-receive-rabies-treatement

Global 05/22/13 cdc.gov: CDC Bulletin – The CDC has redesigned their Travelers’ Health website after rigorous user testing to guide several improvements to make the site easier to use, more informative, and more helpful as you plan for your trip abroad. New features include:

They’ve also designed the pages with both you and your health care provider in mind. The Traveler’s View has all the information you need to have a healthy trip, with ways to print the entire page or just the parts you want. And the Clinician’s View provides your doctor with the information he or she needs to advise you during a pre-travel consultation. It also includes a Disease Directory, and information about new Disease Travel Notice Levels. – See http://wwwnc.cdc.gov/travel/page/new-cdc-travelers-health-website