California 05/15/13 ucdavis.edu: News Release – Scientists at the University of California, Davis, detected the H1N1 (2009) virus in free-ranging northern elephant seals off the central California coast a year after the human pandemic began, according to a study published today, May 15, in the journal PLOS ONE. It is the first report of that flu strain in any marine mammal. “We thought we might find influenza viruses, which have been found before in marine mammals, but we did not expect to find pandemic H1N1,” said lead author Tracey Goldstein, an associate professor with the UC Davis One Health Institute and Wildlife Health Center. “This shows influenza viruses can move among species.” UC Davis researchers have been studying flu viruses in wild birds and mammals since 2007 as part of the Centers of Excellence in Influenza Research and Surveillance program funded by National Institutes of Health. The goal of this research is to understand how viruses emerge and move among animals and people. 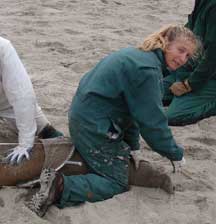 Between 2009 and 2011, the team of scientists tested nasal swabs from more than 900 marine mammals from 10 different species off the Pacific Coast from Alaska to California. They detected H1N1 infection in two northern elephant seals and antibodies to the virus in an additional 28 elephant seals, indicating more widespread exposure. Neither infected seal appeared to be ill, indicating marine mammals may be infected without showing clinical signs of illness. The findings are particularly pertinent to people who handle marine mammals, such as veterinarians and animal rescue and rehabilitation workers, Goldstein said. They are also a reminder of the importance of wearing personal protective gear when working around marine mammals, both to prevent workers’ exposure to diseases, as well as to prevent the transmission of human diseases to animals.

H1N1 originated in pigs. It emerged in humans in 2009, spreading worldwide as a pandemic. The World Health Organization now considers the H1N1 strain from 2009 to be under control, taking on the behavior of a seasonal virus. “H1N1 was circulating in humans in 2009,” said Goldstein. “The seals on land in early 2010 tested negative before they went to sea, but when they returned from sea in spring 2010, they tested positive. So the question is where did it come from?”  When elephant seals are at sea, they spend most of their time foraging in the northeast Pacific Ocean off the continental shelf, which makes direct contact with humans unlikely, the report said. The seals had been satellite tagged and tracked, so the researchers knew exactly where they had been and when they arrived on the coast. The first seal traveled from California on Feb. 11 to southeast Alaska to forage off the continental shelf, returning to Point Piedras Blancas near San Simeon, Calif., on April 24. The second seal left Ano Nuevo State Reserve in San Mateo County, Calif., on Feb. 8, traveling to the northeast Pacific and returning on May 5.  Infections in both seals were detected within days of their return to land. The report said exposure likely occurred in the seals before they reached land, either while at sea or upon entering the near-shore environment. – For complete release see http://news.ucdavis.edu/search/news_detail.lasso?id=10572

Global 05/21/13 Sixty-sixth World Health Assembly: by Jonathan Fowler (AFP) – The world is unprepared for a massive virus outbreak, the deputy chief of the World Health Organization warned Tuesday, amid fears that H7N9 bird flu striking China could morph into a form that spreads easily among people. Keiji Fukuda told delegates at a WHO meeting that despite efforts since an outbreak of another form of avian influenza, H1N1, in 2009-10, far more contingency planning was essential. “Even though work has been done since that time, the world is not ready for a large, severe outbreak,” Fukuda said. Rapid-reaction systems were crucial, given that health authorities’ efforts are already hampered by lack of knowledge about such diseases, he insisted. “When people get hit with an emerging disease, you can’t just go to a book and know what to do,” he said. According to the latest official data, H7N9 avian influenza has infected 130 people in China, and killed

35, since it was found in humans for the first time in March. It is one of a vast array of flu viruses carried by birds, the overwhelming majority of which pose little or no risk to humans. Experts are struggling to understand how it spread to people, amid fears that it could adapt into a form that can be transmitted easily from human to human.- For complete article see http://www.google.com/hostednews/afp/article/ALeqM5gA_WiUNz4DDakbWArFcltmTknupw?docId=CNG.945e0940b30f2076656a59b4ea8de2b5.231 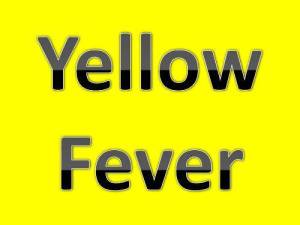 Global 05/17/13 who.int: News Release – The yellow fever ‘booster’ vaccination given ten years after the initial vaccination is not necessary, according to WHO. An article published in WHO’s Weekly Epidemiological Record (WER) reveals that the Organization’s Strategic Advisory Group of Experts on immunization (SAGE) has reviewed the latest evidence and concluded that a single dose of vaccination is sufficient to confer life-long immunity against yellow fever disease. Since yellow fever vaccination began in the 1930s, only 12 known cases of yellow fever post-vaccination have been identified, after 600 million doses have been dispensed. Evidence showed that among this small number of “vaccine failures”, all cases developed the disease within five years of vaccination. This demonstrates that immunity does not decrease with time. . . .

Yellow fever is an acute viral haemorrhagic disease transmitted by infected mosquitoes that is endemic to 44 countries in tropical areas of Africa and the Americas. Infection with the yellow fever virus causes varying degrees of disease, from mild symptoms to severe illness with bleeding and jaundice and fatal outcomes. There are an estimated 200 000 cases of yellow fever worldwide each year. About 15% of people infected with yellow fever progress to a severe form of the illness, and up to half of those will die, as there is no cure for yellow fever.  – For complete news release see http://www.who.int/mediacentre/news/releases/2013/yellow_fever_20130517/en/index.html

Author’s Note: The yellow fever virus is an arbovirus of the flavivirus genus, and the mosquito is the primary vector. It carries the virus from one host to another, primarily between monkeys, from monkeys to humans, and from person to person. Several different species of the Aedes and Haemogogus mosquitoes transmit the virus. The mosquitoes either breed around houses (domestic), in the jungle (wild) or in both habitats (semi-domestic). – Source WHO Yellow Fever Fact Sheet  at http://www.who.int/mediacentre/factsheets/fs100/en/index.html

Missouri 05/20/13 Ozark County: Health officials have confirmed that two skunks captured in the county within the last month have tested positive for rabies. – See http://www.ozarkcountytimes.com/news/article_6539ffdc-c18e-11e2-974e-001a4bcf6878.html

Virginia 05/20/13 James City County: The Peninsula Health District is looking for a large grey dog, possibly a Rottweiler mix, that bit a child on May 9, 2013, near the intersection of Cardinal Court and The Maine W in James City County. Officials say if this dog is not found, the victim may have to undergo post exposure treatment (shots) for the prevention of rabies. Once found, the animal will not be taken away from its owner – only placed on an in-home confinement period of 10 days, officials say. Anyone who has seen an animal that fits this description in that area is asked to contact the Peninsula Health District – Williamsburg Environmental Health Office at (757) 603-4277. – See http://wtkr.com/2013/05/20/officials-search-for-dog-that-may-have-rabies-in-james-city-co/