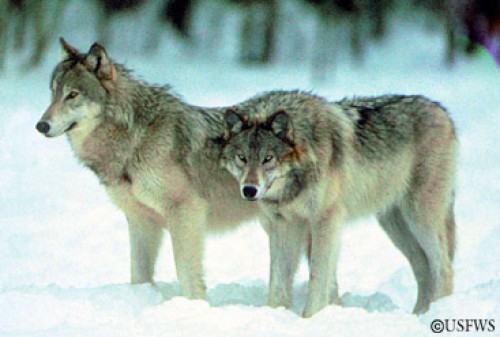 British Columbia 11/13/11 winnipegfreepress.com: by Dene Moore – The chief of the Tsilhqot’in Nation says he is concerned about the toll the region’s abundant wolf population could have on wild horses and endangered caribou this winter. The B.C. government made a controversial decision earlier this year to lift hunting restrictions and keep the wolf hunt open in the Chilcotin region because of concerns about the number of cattle and wildlife falling prey. Critics say the open hunt is a reckless decision not based on science, but Tsilhqot’in Chief Joe Alphonse said even the hunt is not enough and the government should go further. He’d like to see the province contract trappers and put a bounty on wolves on the plateau west of the Fraser River in central

B.C. “As First Nations people we have great respect for wolves but you have to keep things in balance,” Alphonse said in a recent interview. “Eventually things will balance out,” but in the meantime caribou, cattle and wild horses will pay the price, he said. This summer, the Ministry of Forests and Lands eliminated any bag limit

and ordered the wolf hunt season to stay open indefinitely in the area – an approach already in place in several other areas of the province. Provincial officials are adamant it is not a cull and say the wolf population is at a historic high, and both ranchers and area First Nations support the open hunt. Alphonse said low prices for wolf pelts means an open hunt won’t be enough to entice hunters and trappers to reduce the numbers of the pack.- For complete article go to http://www.winnipegfreepress.com/arts-and-life/life/greenpage/wolf-hunt-will-stay-open-in-chilcotin-too-many-wolves-threaten-horses-caribou-133772253.html

Connecticut 11/11/11 East Windsor, Hartford County: A feral cat that bit a Warehouse Point resident on Nov 8 has tested positive for rabies. The cat was described as a light grey tiger. See http://windsorlocks.patch.com/articles/feral-cat-in-warehouse-point-tests-positive-for-rabies

Montana 11/12/11 Billings, Yellowstone County: Woman seeks help in locating the owner of a dog that bit her on Oct 27 to verify rabies vaccination record. See http://billingsgazette.com/news/opinion/mailbag/article_fbe2330c-6c2c-571d-a7c0-1997dd259516.html

Michigan 11/13/11 mlive.com: by Victor Skinner – State fisheries officials are tracking a new fish virus found in Michigan waters this year that has resulted in two carp die-offs. Officials recently confirmed a Koi herpes virus is responsible for the die-off of an estimated 2,000-4,000 adult common carp in Oceana County’s Silver Lake in August. The die-off is the second this year after a June outbreak in Kent Lake in Oakland and Washtenaw counties that killed several hundred carp. “It is not likely it has been here very long,” said Gary Whelan, fish production manager for the state Department of Natural Resources. “We don’t know how widespread it is across the state. Our best guess is it probably came from someone releasing ornamental fish into our waters.” Officials said the Koi herpes virus, also known as KHV, was first detected in Michigan in a private Koi pond near Grand Rapids in 2003, and officials removed those fish. In 2007 and 2008, the virus was responsible for large scale common carp die-offs in Ontario, Canada, Whelan said.

“We know it has been showing up in the Great Lakes region recently,” he said. KHV is thought to only affect common carp, goldfish and Koi (specifically Nishikigoi,which is Japanese meaning “brocaded carp”, an ornamental variety of carp), and there are no known human health effects. Outbreaks of the virus have been found around the world, Whelan said. It is an internationally reportable disease and is causing concerns among large scale production facilities in Japan and Germany

that sell the fish for food or the aquarium trade, he said. Michigan reported the recent outbreaks to the World Animal Health Organization. DNR fisheries biologist Richard O’Neal said officials “didn’t see any significant die-off of any other species in (Silver Lake)” in August when thousands of carp began to wash ashore. – For complete article go to http://www.mlive.com/outdoors/index.ssf/2011/11/koi_virus_blamed_for_die-off_o.html

Arizona 11/12/11 Casa Grande, Pinal County: Rancher believes a mountain lion killed three of his emus on Nov 4, and a fourth emu is missing. Two sets of tracks that were found likely were those of a mother and cub. See http://www.trivalleycentral.com/articles/2011/11/12/casa_grande_dispatch/top_stories/doc4ebeb2a8262dc124164213.txt

Montana 11/11/11 Libby, Lincoln County: A mountain lion attacked and severely injured a colt that had to be euthanized. The attack occurred on Nov 8 but the lion has not been found. See http://www.thewesternnews.com/news/article_256713ca-0cab-11e1-a398-001cc4c03286.html

(See November 7, 2011: Canada: Open-water SALMON farms may be source of VIRUS thought to be reducing WILD SALMON numbers by millions.) 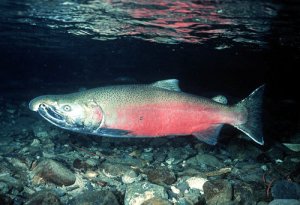 British Columbia 11/13/11 bendbulletin.com: by Phuong Le – Canadian government officials said last week they have found no signs of a potentially deadly, infectious salmon virus in British Columbia. Researchers with Simon Fraser University in British Columbia announced last month they had detected infectious salmon anemia, or ISA, in two wild juvenile Pacific salmon collected from the province’s central coast, prompting fears the influenza-like virus could wreck the salmon fishing industry in the Pacific Northwest. “There’s no evidence that (the virus) occurs in fish off the waters of British Columbia,” Dr. Cornelius Kiley, a veterinarian with the Canadian Food Inspection Agency said, announcing results from the government investigation.

Government tests of the original 48 samples collected from B.C. researchers at a national laboratory have turned up negative for the virus, Canadian officials said. Additional tests performed on other samples have also turned up negative because the quality of some of those samples was too degraded to be conclusive. The results are consistent with independent testing conducted by a lab in Norway, officials said. While that lab found one weak positive reading among multiple tests, it also noted the sample was poor and results could not be reproduced, said Peter Wright, national manager for the Research and Diagnostic Laboratory System with Fisheries and Oceans Canada. Officials are continuing to test samples for the salmon virus, which has affected Atlantic salmon fish farms in Chile, Maine, New Brunswick and other areas. It does not affect humans. Rick Routledge, a researcher with Simon Fraser University who announced the detection of the salmon virus in October, said one positive reading by an independent laboratory in Norway shouldn’t be dismissed entirely. “Given that he did get a positive reading once, from a degraded sample, I don’t feel comfortable with the notion that you could dismiss that out of hand,” he said. “I hope that further sampling and testing would continue.” – For complete article go to http://www.bendbulletin.com/apps/pbcs.dll/article?AID=/20111113/NEWS0107/111130358/1009/NEWS01&nav_category=NEWS01

British Columbia 11/05/11 upi.com: A virus that has hit fish farms hard in eastern Canada, Norway and Chile may be present in wild salmon that spawn in British Columbia, a biologist says. Bruce Cohen, a justice on the provincial supreme court, has scheduled a two-day special hearing on evidence that the infectious salmon anemia virus could have hit the region, Postmedia News reported.

Cohen is leading an inquiry into the sharp drop in numbers of Fraser River salmon. Alexandra Morton, a biologist who submitted samples of coho and sockeye salmon for testing, blames open-water salmon farms. She said ISA could have arrived in British Columbia with imported salmon eggs.  “It’s a complete wild card. We just don’t know and that’s what has everyone so afraid,” she said.

The number of salmon returning to the Fraser to spawn in 2009 dropped to about 1 million, when 10 million had been expected, but bounced back in 2010. The fish-farming industry says 2009 was an anomaly caused by unusual conditions in Queen Charlotte Sound in 2007 when the salmon went to sea. Wild salmon managers argue the 2009 catastrophe followed years of lower numbers and 2010 was the anomaly.

Arizona 11/04/11 azgfd.net. ArizonaGame&FishDeptWildlifeNews: As part of a conservation program for the endangered Mount Graham red squirrel, the Arizona Game and Fish Department and the U.S. Forest Service conducted an annual survey and estimated approximately 240 animals in the Pinaleño Mountains in southeastern Arizona.

The latest survey count is an increase of 26 squirrels over the 2010 estimate. Small mammal species like the Mount Graham red squirrel typically have cyclical populations that depend on the conifer cone crop, their primary food resource. While this year’s surveys show an increase in the minimum population, biologists remain concerned about the species’ status and are exploring new ways to conserve it, including habitat improvements, squirrel research, and consideration of a pilot captive breeding program. The red squirrel survey is conducted annually in the fall by visiting a random sample of known middens (areas where red squirrels store or cache their cones).The Mount Graham red squirrel population spiked to around 550 animals in the late 1990s, but typically ranges between 200 and 300 individuals. Habitat losses caused by fire and insect infestations and poor cone crops caused by drought are considered primary factors in the species’ recent trends.“ Squirrel numbers are closely tied to available habitat and food resources,” says Tim Snow, nongame specialist for the Arizona Game and Fish Department. “Improving forest health and preventing catastrophic wildfire events will help ensure the continued existence of these squirrels.” Mount Graham red squirrels live only in the upper elevation conifer forests of the Pinaleño Mountains and feed primarily on conifer seeds. Females produce two to seven young annually. The species was added to the endangered species list in 1987. The multi-agency Mount Graham Red Squirrel Recovery Team, including the Coronado National Forest, Arizona Game and Fish, University of Arizona, Native American tribes and others, oversees conservation of the species. 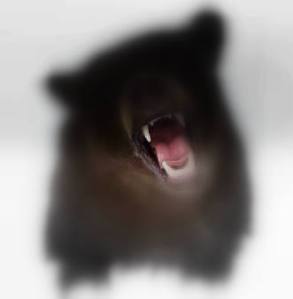 Montana 11/05/11 Madison County: A Billings hunter was knocked down by a bear on November 4 in the Gravelly Range near Cascade Mountain. Fortunately, the bear then ran off without biting or clawing the hunter, who has been released from the hospital. The man was hunting with a partner who was uninjured. Officials aren’t certain what type of bear was involved in the incident. See http://billingsgazette.com/news/state-and-regional/montana/article_5bd62534-07e4-11e1-9d1b-001cc4c03286.html

New York 11/04/11 Niagara Falls, Niagara County: The dead and mutilated body of a fox found under the Lockport Road Bridge is presumed

positive for rabies. It has been reported by residents that many children possibly had contact, but the lab was unable to test for rabies due to the body’s state of deterioration. See http://www.wkbw.com/home/Is-A-Rabid-Fox-In-The-Falls-133280163.html

rabid raccoon killed by three dogs earlier in the week is the 16th rabies case reported in the county this year. See http://www.myfox8.com/news/wghp-story-davidson-co-rabies-111104,0,4379520.story